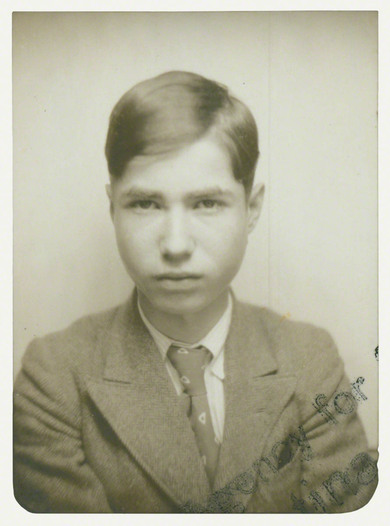 Passport photo of Ernst Loewy from his immigration certificate for Palestine, 1936

I have great admiration for the fact that my parents had enough foresight to part from their only son and to send me with the so-called Youth Aliyah to Palestine in 1936. It saved my life.

As a student, Ernst Loewy had experienced open anti-Semitism even before 1933. In autumn 1935 his parents decided that he should leave Germany. In December 1935 he was accepted on the Youth Aliyah programme after a four-week preparatory period on a farmstead close to Berlin. In April 1936 he reached the Kiryat Anavim kibbutz, close to Jerusalem, where he lived until 1938. He kept in touch with his parents by letter. After the November pogroms they also succeeded in fleeing to Palestine.

In March 1938, Ernst Loewy completed his training as a bookseller in Tel Aviv. He was not able to study due to a lack of finances. In 1942-43 he was a civil employee of the British army and worked at one of their material depots. At the same time, he was writing e.g. for the "Orient" exile journal.

After serving as a soldier in the Israeli army, Loewy worked as a librarian and archivist in the press office of the Israeli government. By now a married father, he returned to Germany in 1956. His parents followed in 1957. The Loewys settled in Frankfurt am Main.