Prince Hubertus and Princess Helga zu Löwenstein in front of the port of New York, April 1937

[The banished and exiled] are living [...] proof of what Germany is – the land of knowledge and research, the land of philosophy and humanity, and not the land of barbarism, of demons, of servitude and of army boots [...].

The Christian-Conservative Democrat and dedicated publicist Hubertus Prince zu Löwenstein emigrated with his wife to Austria after their flat had been searched in April 1933. In autumn 1934, the German Consulate in Innsbruck denied him a new passport. Shortly afterwards his German citizenship was renounced.

From 1935 the zu Löwensteins lived alternately in the United Kingdom and the USA. Together with the Austrian writer Richard A. Bermann, zu Löwenstein developed the idea of setting up an aid organisation to establish a network of emigrant intellectuals and offer them financial support. He founded the American Guild for German Cultural Freedom in New York to raise funds for this German Academy in exile.

After the war began in 1939, the zu Löwensteins moved permanently to the USA. Hubertus Prince zu Löwenstein was committed to his aid organisation and gave talks and guest lectures. He was also a critical voice in the debates about the future political order in Germany. In 1940 he fell out with with Thomas Mann over this matter. Mann was a key supporter of the American Guild, and so Löwenstein resigned from his offices in the aid organisation.

In October 1946 the zu Löwenstein family returned to Germany with their two daughters who had been born in exile. They were among the first to return. Hubertus Prince zu Löwenstein worked as a journalist and politician, e.g. from 1953 to 1957 as a member of the Free Democratic Party (FDP) in the Bundestag and from 1960 to 1971 as a Special Adviser to the Press and Information Office of the Federal Government. 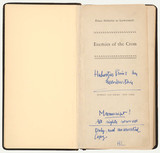