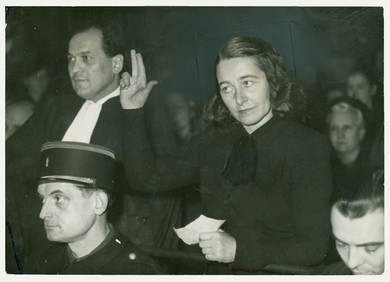 Margarete Buber-Neumann being sworn in during the Kravchenko trial in 1949 in Paris.

We were given 600 grams of damp black bread with a thin watery soup and sometimes a small salted fish in return for carrying out back-breaking work in the fields from dawn till dusk every day. [...] We were constantly on the brink of starvation.

Margarete Buber-Neumann in a manuscript on camp imprisonment in the Soviet Union, 1949

After living in Spain and Switzerland, the politically committed Margarete Buber-Neumann and her husband Heinz Neumann emigrated to the Soviet Union in May 1935. However, they were both soon persecuted there, too, under the terror of the Stalinist system. Heinz Neumann was arrested and executed in 1937. In 1938, Margarete Buber-Neumann was arrested and sentenced to five years camp imprisonment in Siberia. The Soviet Union handed her over to the German Reich in February 1940 under the terms of the Hitler-Stalin Pact.

After five months in police custody in Berlin, she was imprisoned as a Communist in the Ravensbrück Women's Concentration Camp in August 1940. There she met the Czech journalist Milena Jesenská, the friend and translator of Franz Kafka. The two women were bound by a close friendship until Jesenská's death. Margarete Buber-Neumann was released from Ravensbrück concentration camp on 21 April 1945. It took her several weeks to make her way to her mother in Bavaria.

In 1946 she went to Sweden for several years. There she began to write about her experiences in the Soviet Union and the Ravensbrück concentration camp. Afterwards, Margarete Buber-Neumann settled in Frankfurt am Main. She remained politically active throughout her life. She worked as a publicist, gave lectures and committed herself to combatting all forms of totalitarianism as a contemporary witness.