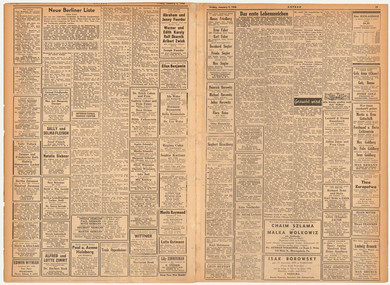 Missing person ads and first signs of life, in: Aufbau, New York, 4 January 1946. // After the end of the Second World War, the "Aufbau" newspaper printed countless ads in which families were looking for surviving relatives in Europe. Name lists which pooled information from aid organisations and Jewish communities in Europe were published each week.

The experience of exile continued after the end of the war, regardless of whether one returned or not. The period of exile was a rupture in their lives, the importance of which many exiles only gradually came to realise.

Only after the war did many learn what had become of their loved ones. It sometimes took decades for them to obtain any degree of certainty. Many exiles also experienced the bureaucratic hurdles, such as the procedures for claiming compensation and indemnification, as arduous.

The political and cultural aftermath of exile also depended on the extent to which the subject was hushed up – or was explored and reappraised. The 1968 movement was instrumental in ensuring that former exiles were made visible.