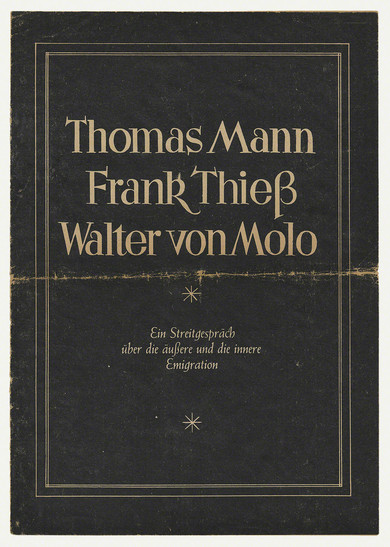 Th. Mann, F. Thieß, W. v. Molo: [“A Dispute over ‘Outward’ and Inner Emigration”], 1946. // In a polemical debate after the war, Thomas Mann was accused of having watched "the German tragedy unfold from the box and rear stall seats of abroad" as an exile. He was challenged to return in an open letter. Mann, however, vehemently rejected this.

Numerous debates and conflicts surrounding exile arose in post-war Germany, both in the West and the East. These included the question of who was allowed to shape post-war society, the subject of compensation, and the open rejection of remigrants, e. g. in high political office.

Anti-Semitic sentiment often continued to be expressed in these debates. To this day, exiles are frequently compared and contrasted with those who went into "inner emigration" and with German "expellees".

The nascent research into exile dealt initially with the literature of exiled writers. It was largely initiated by the exiles themselves.