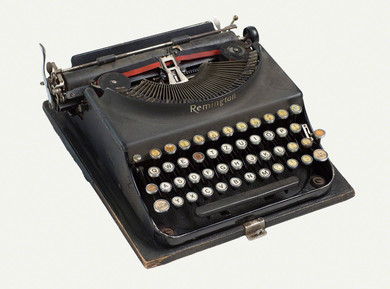 Office equipment of the American Guild for German Cultural Freedom, New York: Typewriter, c. 1938. // The aim of the organisation, founded in 1935 in New York at the initiative of Prince Hubertus zu Löwenstein, was to provide funding for the creation of literary and scientific works in exile. In 1938, a patron made rooms available which were equipped with simple facilities.

Many people needed help in preparing their emigration or escape – and then further assistance upon arriving in their country of refuge. They were often supported by aid organisations. In many cases these were closely networked and collaborated at the international level. Often they had a religious or political background or focused on a specific target group.

Aid organisations provided information on escape routes and procured travel documents if necessary, sometimes even fake ones. Upon the refugees' arrival in the host country, the organisations helped them to find work, supported them in setting up networks with each other and assisted them in integrating socially and culturally.

Refugees also received aid from committed individuals. Without this solidarity, many refugees would have failed to escape and their experience of exile would have been different.