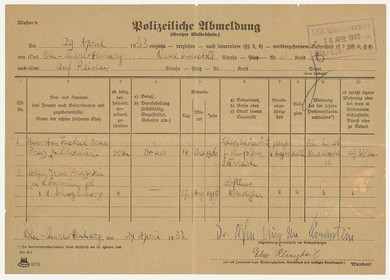 Official deregistration [“travelling”] of Prince and Princess zu Löwenstein, Berlin, 29 April 1933. // As a democratic publicist, Prince Hubertus zu Löwenstein was immediately subjected to intensive scrutiny following the handover of power to the Nazis. A policeman warned him about the arrest. Stating officially that he was ["travelling"], he fled with his wife into exile in Austria.

Even before the handover of power to the Nazis, people had started to leave Germany due to the worsening political situation. From 1933, however, exile became a mass phenomenon.

Initially, it was mainly political opponents of the regime who went into exile. The early imposition of professional restrictions also deprived many people of their livelihood. The "Nuremberg Laws" were used as the basis for disenfranchising German Jews in 1935.

The situation deteriorated further with the annexation of Austria and the occupation of the Sudetenland in 1938. The November pogroms of 1938 triggered the biggest wave of departures. From October 1941 Jews were banned from leaving the German Reich. Many who had not gone into exile were deported and murdered.