Stefanie Zweig with her dogs at the Ol Joro Orok farm, August 1941

[...] my fellow students [are] very polite to me and also helpful, but I find them difficult to read. They keep asking me about Africa, how many lions I have seen [...]. No-one ever asks me how I came to Africa [...].

In June 1938 the 5-year-old Stefanie Zweig emigrated to Kenya with her mother Lotte. Her father Walter Zweig was already there. The lawyer was working in Kenya as a farm manager. Everyday life was full of privation, yet also of new impressions, and Stefanie quickly acclimatised. After the beginning of the Second World War, Stefanie's father was interned at Camp Ngong; Stefanie and her mother were forcibly held in a hotel in Nairobi. The family were stripped of their German citizenship in November 1939.

After being released in late 1939, the family moved to another farm. Stefanie was sent to school. Life in the boarding school was characterised by strict rules. Despite being Jewish, Stefanie was forced to go to church each Sunday. Her parents had to have their daughter's letters translated, as she only wrote in English. In May 1942, Stefanie's father joined the East African Army as a soldier; the family had to leave the farm again and moved to Nairobi.

Stefanie's brother Max was born in 1946. The Zweigs returned to Germany in the spring of 1947. The father was given the possibility to work as a judge in Frankfurt am Main. Stefanie Zweig initially had difficulties with the German language, and it was not easy for her to adjust.

After completing her school education, Stefanie Zweig became a journalist. From 1959 she worked for the arts section of the evening edition of the Frankfurt "Abendpost". From 1963 to 1988 she headed the features section. It was not until much later that she began to process her experiences of exile as a writer. 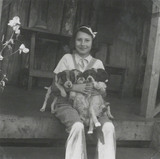