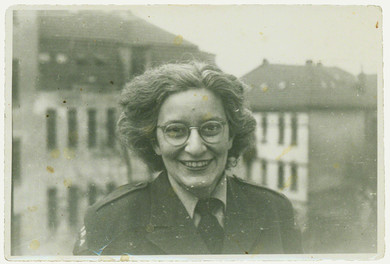 Clementine Zernik in the uniform of the United Nations Relief and Rehabilitation Administration (UNRRA), [1946/47]

Of course I lost a lot, like many others, but hatred does not help you get over it. It just destroys you.

Clementine Zernik in an article in "Aufbau" to mark her 85th birthday, 1990

After the annexation of Austria, Clementine Zernik's licence to practise law was revoked because of her Jewish background. In July 1938 she emigrated to the USA. Clementine Zernik could not practise law there because of the differences in the legal system. She did occasional work and committed herself to Austrian Action, a group representing the interests of Austrian emigrants in the USA. From 1942 Clementine Zernik translated German radio broadcasts for the British Information Service in New York. In 1944, now a US citizen, she went to London where she worked as an editor and announcer for the American Broadcasting Station in Europe (ABSIE) until the end of the war.

In 1947 Clementine Zernik returned from Europe to the USA. She worked as a librarian for the UN Library until 1975. As president of the Austrian American Federation, she dedicated herself to supporting the cultural exchange between Austria and the USA. Clementine Zernik applied for Austrian citizenship in 1993. She was awarded this in 1994 at the Austrian Consulate in New York.