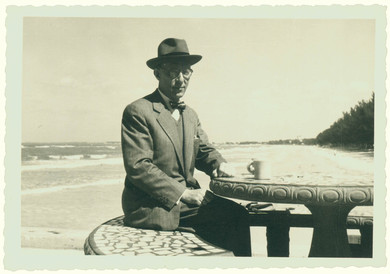 First of all, I had to refresh my geography to find out where Turkey was and discover whether it was tropical or not. To be honest, though, I think many of my colleagues were in a similar situation.

Fritz Neumark, retrospectively, in an interview, 1983

Fritz Neumark lost his professorship at the University of Frankfurt in the spring of 1933 due to his Jewish background. In September 1933 he emigrated to Turkey with his wife and two children, aged two and four. With the help of the Notgemeinschaft deutscher Wissenschaftler im Ausland (Emergency Society for German Scholars in Exile) he was able to take up a professorship in the field of Social Hygiene and Statistics at the University of Istanbul. He quickly acclimatised and was soon speaking Turkish. This allowed him to interact closely with his students. Fritz Neumark was soon publishing an economic journal and writing numerous specialist publications.

In May 1939, Fritz Neumark had to have a "J" stamped in his German passport at the German consulate in Istanbul. The mandatory first name of "Israel" followed in March 1940. Shortly afterwards the family was stripped of its German citizenship.

Fritz Neumark remained in Turkey after the end of the war and, from 1946, headed the newly founded public finance institute of the University of Istanbul. He served as adviser to the Turkish government and the Central Bank and was involved in reforming the Turkish tax system. Upon being called to the University of Frankfurt in 1949, he initially only accepted a guest professorship. In 1952 he decided to return permanently to Germany. It was not until 1954 that he resumed his German citizenship, which he took in addition to his Turkish citizenship. In 1954/55 and 1961/62 he was vice chancellor of the University of Frankfurt.