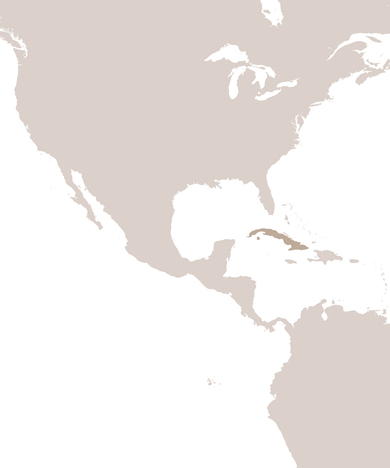 Political situation:
Formally a republic with dictatorial structures; military coup in September 1933; domestic power struggles; corruption; tense labour market. 1941: Entry into the war on the side of the Allies.

Conditions of entry:
Restrictive asylum policy; visas obligatory for Jewish refugees from October 1938; Cuban consulates traded illegally in immigration papers which were later annulled; money had to be deposited prior to entry. 1942: Immigration embargo. Work permits were rarely issued.

Cuba was a stopping point en route to the USA or Mexico for many refugees. New arrivals were interned in the detention centre in Tiscornia where they were often held for months. One of the few opportunities for work was the diamond industry, which had been established by exiles from Amsterdam and Antwerp with the approval of the Cuban government. Here the emigrants were put to work as diamond grinders. In May 1939 a number of refugee ships, including the "St. Louis" with over 900 people on board, were not allowed to dock in the port of Havana because the passengers' transit visas had been annulled. After weeks of uncertainty the asylum-seekers were returned to Europe. Many were later murdered in extermination camps.